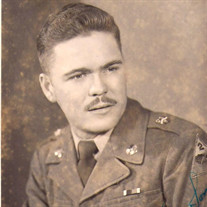 Mr. Robert Lee “Bob” Colby, 92 of Sylvester, died on Tuesday, July 6, 2021 at Tift Regional Medical Center. A memorial service will be held at 10:00 AM on Thursday August 5, 2021 at Hillcrest Cemetery. The Rev. Deacon Ridenour Lamb will officiate. Mr. Colby was born on August 15, 1928 in Cadillac Michigan., to the late John and Josephine Pappin Colby . He had lived in Worth County since the 1960's and was a veteran having served in the United States Army during the Korean War. Mr. Colby was the owner and operator of Manufacturing Home Sales. He enjoyed watching football and playing Golf, but most importantly spending time with his friends and family. Mr. Colby was a member of the St. John and St. Mark Episcopal Church in Albany, GA. Survivors include his wife, Sherry Colby of Sylvester; children, Kevin Colby of Mableton, GA., Jack Colby (Kim) of Sylvester, and Jill Colby Fitzgerald of Duluth, GA; step-children, Robin Pfluke of NY., and Tony Shiver of Sylvester; numerous grand and great grandchildren. In addition to his parents, Mr. Colby was preceded in death by his first wife, Beulah Colby on June 28, 1982; siblings, Jack Colby, Johnny Colby, Vonnie Colby, and Glorianna Todd. Donations may be made to the American Legion Post 335 Sylvester: C/O Ray Humphrey, 205 E. Pope St Sylvester, GA. 31791. The services will be announced by Banks Funeral Home at a later date. Please sign our online guest registry at www.banksfh.com. Banks Funeral Home in Sylvester is in charge of arrangements.

The family of Mr. Robert "Bob" Lee Colby created this Life Tributes page to make it easy to share your memories.