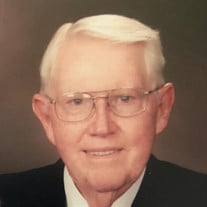 Mr. Reginald Allen McCorvey, 82 of Anderson City, GA, died Thursday, December 27, 2018 at Cobblestone Rehab Healthcare Center. The funeral service will be held at 2:00 PM on Sunday, December 30, 2018 at Kimball United Methodist Church with interment to follow in the Kimball Cemetery. The Rev. Jerry Cooper, Rev Dexter Wilson and Rev. Mickey Jacobs will officiate. Mr. McCorvey was born on June 3, 1936 in Turner Co to the late Warren Daniel Jackson and Maggie Bell White McCorvey. He was reared on a farm near Ashburn, GA , He attended Turner County Public Schools and was a 1953 graduate of the Sycamore High School. Mr. McCorvey farmed alongside his father the following year. He attended Norman College, Norman Park, GA, from September 1954 to June 1956 completing the full 2 years offered. From 1956 to 1961 Mr. McCorvey was associated with McCorvey Brothers Farm service of which he was part owner. They operated a farm, and a retail outlet to farmers for fertilizers, insecticides, etc.; they bought and stored peanuts and grains, also during this time they were closely associated with Sylvester Farm Equipment Co, as part owner. In all above operations, he was active in all phases of operations, including office work, employee supervision, purchasing and selling. From August 1961 to August 1963 he served in the United States Army. He attended the Army Intelligence Corp School in Baltimore, Md. Mr. McCorvey received general training in all phases of Intelligence work. After graduation he was assigned to headquarters, Region IV, IIITHINTC group, consisting of the states of Alabama and Mississippi. He was given a security clearance to handle any information including "Top Secret". He did background investigations of people seeking security clearances and investigations of people and events of questionable and known security violations against the USA, screened and assembled this info and passed it along to the proper agencies of duty during this time. His separation papers state that he is a qualified investigator, according to Civil standards. From 1963 to 1965 he worked for the Albany Warehouse Co, in Albany GA. Mr. McCorvey was a manager of the Sylvester, GA plant. They were engaged in the manufacturing and sales of fertilizers and of all types of farm chemicals. Mr. McCorvey owned and operated restaurants in Sylvester and Ashburn, from 1965 to 1969. Starting in 1969 he worked with Economics Laboratory, Inc. He was the manager of the North Florida and South Georgia territory. They were engaged in sales of sanitizing and cleaning equipment and chemicals to food processing plants (Dairy, Poultry, Citrus, Meat, Etc). He also performed minor service and repairs where it was possible to do so in the field. Starting in 1974 he started farming full time in Worth County until his retirement. He was the chairman of the Kimball Church and Cemetery Board. Mr. McCorvey was on the Worth County Board of Directors for the Farm Bureau for 34 years, and was also president from 1996 to 2001 and from 2007 to 2011. Mr. McCorvey was on the original planning committee for the annual Georgia Peanut Festival. He enjoyed fishing, attending fish fries, and spending time with family and friends. Survivors include his wife, Barbara Belk McCorvey of Anderson City; son, Allen McCorvey (Chesley) of Anderson City; grandson, Jackson McCorvey; sister-in-law, Patsy McCorvey and a host of nieces and nephews. In addition to his parents, Mr. McCorvey was preceded in death by his siblings, Inez Lumpkin, Lillian Hobby, Lautrice Berry, Clinton McCorvey, Howell McCorvey and Danny McCorvey. The family will receive friends on Saturday from 5:00 PM until 7:00 PM at Banks Funeral Home. In lieu of flowers the family is requesting donations may be made to the Kimball Cemetery fund in the care of, Carol Hancock. Address: 4010 GA Hwy 33 South, Doerun, Ga. 31744 Please sign our online guest registry at www.banksfh.com. Banks Funeral Home in Sylvester is in charge of arrangements.

The family of Mr. Reginald Allen McCorvey created this Life Tributes page to make it easy to share your memories.