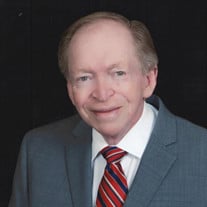 Mr. Rayford "Ray" Wallace Mullis, Jr., 77 of Sylvester, died on Thursday, March 12, 2020 at Phoebe Putney Memorial Hospital. The graveside service will be held at 2:00 PM on Sunday, March 15, 2020 at the Hillcrest Cemetery. The Rev. Donnie Duncan will officiate. Mr. Mullis was born on April 29, 1942 in Ocilla, Ga., to the late Rayford Wallace Mullis, Sr., and Evelyn Reid Mullis. He had lived in Sylvester most of his life and was a retired Pharmacist. Mr. Mullis earned his Bachelor of Science Pharmacy degree from the University of Georgia in 1966. He began his career with Tift County Drugs, and over the years he worked for many pharmacies and was the owner of Adrian Drugs in Adrian, GA where he lived for 15 years. Mr. Mullis later retired from Winn Dixie Pharmacy in 2010. He was an excellent marksman, and he enjoyed going to the Mountains and watching Westerns but most importantly spending time with his friends and family especially his grandchildren. Mr. Mullis was a member of First Baptist Church and the Dowdy Baker Sunday School Class. Survivors include his wife, Elizabeth "Beth" Mullis of Sylvester; children, James Mullis (Renee') of Cornelia, Ga., Darrell Mullis (Jenny) of Adrian, Ga.; grandchildren, Alisha Harpe (Coy), Brooke Sheppard (Justin), Tyler Mullis (Olivia), Kristen Mullis, Jared Hughes, Alyson Davis (Zachary) and John Henry Mullis; 8 great grandchildren; brothers, Reid Mullis (Kay) of Sylvester and Ronnie Mullis (Joy Lou) of Monroe, Ga.; a host of nieces and nephews. In addition to his parents, Mr. Mullis was preceded in death by a daughter, Laura L. Mullis on March 25, 1986. The family will receive friends on Saturday from 5:00 PM to 7:00 PM at Banks Funeral Home. Please sign our online guest registry at www.banksfh.com. Banks Funeral Home in Sylvester is in charge of arrangements.

The family of Mr. Rayford "Ray" W. Mullis Jr. created this Life Tributes page to make it easy to share your memories.