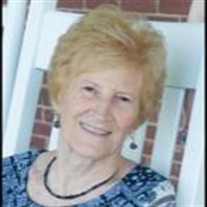 Mrs. Peggy Shiver Ford, 88, of Sylvester died on Wednesday, December 8, 2021, at her home surrounded by her family and friends. The graveside funeral will be held at 2 pm on Friday, December 10, at Poulan Cemetery in Poulan Georgia. Rev. Fred White and Rev. Mike Deloach will officiate. Mrs. Ford was born on September 23, 1933, in Manchester, Georgia, to the late Gordon and Anna Shiver. She grew up in Poulan, Georgia and remained there until 1970 when the family moved to Sylvester, where she would live for the rest of her life. She was a dedicated, faithful member of Poulan Baptist Church and served joyfully in many capacities including Finance Committee, Benevolence Committee, and GA’s teacher. She also served as church bookkeeper for many, many years. Her church was a priority in her life, and she served faithfully until her death. She was compassionate, selfless, and generous, and she was cherished by many in her community. Known affectionately as “P”, she loved music, loved to dance, loved the Lord and her family. She worked with many companies through the years including Worth Tractor Company, Sylvester Motor and Tractor Company, and Farm Commodities until retirement. Mrs. Ford was a very hard worker and a meticulous bookkeeper. Even after retirement she went in to the office each day to help with anything needed and continued to do so for many years. Mrs. Ford was preceded in death by her husband, Donald W. Ford, Sr., on October 24, 1986. In addition to her parents and husband, she was preceded in death by her brother and sister, Bo Shiver (Norma), and Evelyn Autry (Louis); brothers-in-law, Lyndel Ford and French Ford; and sisters-in-law, Vivian Collins and Nell Troutman (Rufus). Survivors include her sons, Donnie Ford (Leigh) and Todd Ford (Misty); four grandchildren, Kaley Bowen (Josh), Anna Taylor (Ryan), Jay and Graham Ford; four great grandchildren, Ford and Will Bowen, Asher and Callie Taylor; one sister-in-law, Patsy Ford; and many nieces, nephews, and cousins. Mrs. Ford is also survived by her long time close friend and constant companion whom she loved dearly, Gary Benson. The family wants to thank Mrs. Ford’s caregivers Dianne Anderson, Teresa Toomer, Brenda McMillian, Frankie Morgan, Bertha Fowler, Ruby Ruffin, Audrey Green and Latoya Miller. Words are inadequate in expressing how much your tender love and care has meant to the family. For those desiring, memorials may be made to Poulan Baptist Church, PO Box 67, Poulan GA, 31781.

Mrs. Peggy Shiver Ford, 88, of Sylvester died on Wednesday, December 8, 2021, at her home surrounded by her family and friends. The graveside funeral will be held at 2 pm on Friday, December 10, at Poulan Cemetery in Poulan... View Obituary & Service Information

The family of Mrs. Peggy Shiver Ford created this Life Tributes page to make it easy to share your memories.