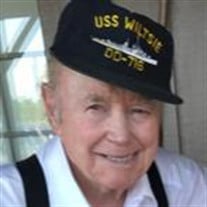 Mr. Merrill “Mike” Eugene Butler, Jr., 92, died peacefully on Sunday, October 3, 2021, at the Harmony at Savannah Retirement Village with his loving wife of 64 years Marilyn by his side. The graveside service will be held at 11:00 AM on Friday, October 8, 2021, at the Hillcrest Cemetery. The Rev. Ben Palacz will officiate. He was a long-term resident of Sylvester and retired contractor for Hercules Inc. In addition to Marilyn, he is survived by his brother Kenneth Wayne Cook, children Michael Butler (Sheila), David Butler (Susan), Chris Butler (Karen), Kenneth Sweringen (Felicia) and Caroline DeMarco (Michael), grandchildren Meghan Butler, Michael Butler Jr., Jared Butler, Kristen Butler, Julia Butler, Jaden Hood, Brett Butler and great grandchildren Miranda Butler, Isaac Hood and Eli Hood. Merrill went by Mike as many people in his early years would mispronounce Merrill. He was born in Columbia Mississippi to the late Peal Cook and Merrill Butler Sr. His father died when he was two, John Cook a fun-loving man would be his father figure and mentor. John and Peal would provide Merrill with two brothers the late John W. Cook and his kid brother Kenneth Wayne Cook. Merrill’s first love was nature. He would immerse himself in the sounds and nuances of the Mississippi woodlands near his home, honing skills as a hunter and explorer to the dismay of the forest dwelling inhabitants. His wanderlust would take a worldly track with the US Navy upon high school graduation with assignments in the Philippines, Japan, Korea, Hong Kong and later the Mediterranean. He would transition from a boy to a man in the Navy, hardened by the realities of war. Marines he befriended in the Philippines would be the first Americans to perish in the Korean conflict. He was a signalmen and target spotter on the destroyer USS Wiltsie, providing close shore support roles during the war including MacArthur’s campaign at Incheon Korea. Merrill was a prolific writer, entertaining family with stories and poetry of exotic encounters and destinations. He was also an accomplished dancer winning a contest in Hong Kong. He would later transition to Essex class carrier duty in the Mediterranean aboard the USS Bennington and USS Lake Champlain. His family moved to Andalusia Alabama, while visiting he met the love of his life, a spirited Alabama girl Marilyn Wilson. They would begin a new life together in august 1957 that would last for sixty-four years and five children. Merrill started his own contracting business harvesting the remnants of long leaf pine stumps, used for resins in the chemical industry. Business would take them to Sylvester Georgia in 1959 and later West Palm beach Florida before returning to Sylvester. Marilyn was his anchor and passion throughout their marriage. Merrill worked hard for his family. He taught his children by example, hard work, optimism, and tenacity. His retirement years were spent mastering his love of the outdoors. He was an expert marksman, turkey, and deer hunter. He and Marilyn enjoyed their recreational campers and an occasional trip to the Biloxi casinos. Merrill was proud of his grandchildren and family; they are his legacy. At the age of 88 he published his memoirs, “Waypoints in My Life”. He would say life is a series of sunrises and storms, but you must always look for the sunrise. Merrill always saw the sunrise; he was undefeatable in life. He will be missed by family and friends but will live on in their hearts. The family will receive friends on Thursday from 5:00 PM until 7:00 PM at Banks Funeral Home. In lieu of flowers please consider donating to Hospice of Savannah, www.hospicesavannah.org

Mr. Merrill &#8220;Mike&#8221; Eugene Butler, Jr., 92, died peacefully on Sunday, October 3, 2021, at the Harmony at Savannah Retirement Village with his loving wife of 64 years Marilyn by his side. The graveside service will be held... View Obituary & Service Information

The family of Mr. Merrill Eugene Butler Jr. created this Life Tributes page to make it easy to share your memories.