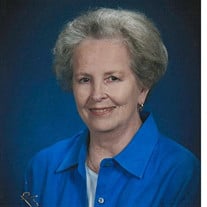 Mrs. Marian Overton Moore, 84 of Sylvester, died on Thursday, February 28, 2019 at her daughters residence in Atlanta. The funeral service will be held at 11:00 AM on Tuesday, March 5, 2019 at the First Baptist Church of Sylvester, interment will follow in the Hillcrest Cemetery. The Rev. Mike Carter and Rev. Donnie Duncan will officiate. Mrs. Moore was born on May 20, 1934 in Atlanta, GA to the late Arthur Sessions Overton and Marian Aultman Sumner. She had lived in Worth County most of her life. Mrs. Moore graduated from the Saint Joseph's School of Nursing in Atlanta. After completing nursing school she continued her education and became a paralegal. Her career began with Marion Bridges Attorney at Law and later with Norman J. Crowe Attorney at Law. Mrs. Moore later retired as a Clerk for the Worth County Magistrate Court . She was member of the Pine Knoll Country Club where she won the Women's Club Championship in the 1970's; She was also a Girl Scout Troop Leader for many years. Mrs. Moore was a member of the First Baptist Church in Sylvester where she taught the Youth Sunday School Class. Survivors include daughter, Kris Moore Ballard (Mal Pace) of Atlanta; son, Victor Stephen Moore (Louis Minghinelli) of Palm Springs, CA; grandsons, Stephen Adkins Ballard and Matthew Pace; brother, Dr. James Andrew "Andy" Sumner (Mary) of Baltimore, MD; sister, Suzy Sumner Varner (Ed) of Kathleen, GA; nephews, Drew Sumner and Jed Varner (Virginia); nieces, Erica Overton Sarkissian and Annabelle Sarkissian; sister-in-law, Carol Overton; beloved grand-dog, Waffles; and a host of other nieces and nephews. In addition to her parents, Mrs. Moore was preceded in death by her husband, Charles M. Moore on December 16, 2004; and a brother, Arthur Eugene "Gene" Overton. The family will receive friends on Monday from 5:00 PM until 7:00 PM at Banks Funeral Home. In lieu of flowers donations may be made to the, Arthritis Foundation National Office 1355 Peachtree St. NE. Suite 600 Atlanta, GA 30309 or your local Hospice Facility. Please sign our online guest registry at www.banksfh.com. Banks Funeral Home in Sylvester is in charge of arrangements.

Mrs. Marian Overton Moore, 84 of Sylvester, died on Thursday, February 28, 2019 at her daughters residence in Atlanta. The funeral service will be held at 11:00 AM on Tuesday, March 5, 2019 at the First Baptist Church of Sylvester, interment... View Obituary & Service Information

The family of Mrs. Marian Overton Moore created this Life Tributes page to make it easy to share your memories.