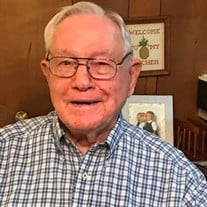 Mr. Joe Kemp Shiver, 94 of Sylvester, died on Saturday, February 1, 2020, at Pine Shadows Retirement Manor. The funeral service will be held at 11:00 AM on Tuesday, February 4, 2020 at the First Baptist Church of Sylvester, interment will follow in the Hillcrest Cemetery. The Rev. Donnie Duncan will officiate. Mr. Shiver was born on October 13, 1925, in New Smyrna Beach, FL., to the late Ermon Coley and Lois Augusta Kemp Shiver. He had lived in Worth County most of his life and graduated from Sylvester High School at the age of 16. Later that year he rode the train to Athens where he enrolled at the University of Georgia. However, his education was interrupted by World War II. He was in the Army Air Corp waiting on Flight School when the war ended. Mr. Shiver returned to the University of Georgia and completed his degree in Agricultural Engineering. While at Georgia he also met Mae Grubbs and they were later married. He was the owner and operator of Shiver Tractor Company for 45 years and was involved in the farm equipment industry business his entire working career. Mr. Shiver was active in the Georgia Farm Equipment Dealers Association and served on its Board of Directors and as President. He also served as a Director for many years and as Vice President of the National Farm Equipment Dealers Association. He enjoyed his service as a Director of Colony Bankcorp, Inc., for many years and would later continue to regularly attend Colony Board Meetings as a Director Emeritus. He even attended the December 2019 meeting. Mr. Shiver was a active member and Deacon of First Baptist Church, the Elton Baker Sunday School Class, and also served in many other capacities. Survivors include his children, David Shiver (Janet) of Sylvester, Don Shiver (Jan) of Albany and Mary Lois Hightower (Neil) of Thomaston; grandchildren, Laura Brown (Greer), Will Shiver (Shelley), Zibby Bernstein (Dan), Holly Langston (Grant), Hamp Hightower and Hannah Hightower; great grandchildren, Maidee, McKenzie and Joe Brown, Kemp and Addie Gray Shiver, Zoe and Ben Bernstein, Henry and Maggie Langston. In addition to his parents, Mr. Shiver was preceded in death by his wife of 69 years, Mae Grubbs Shiver on February 7, 2017; sister, Jean Shiver Woolard; brother, E.C. "Josh" Shiver, Jr., The family will receive friends on Monday from 6:00 PM until 8:00 PM at Banks Funeral Home. For those desiring Memorials may be made to the First Baptist Church, P.O. Box 309 Sylvester, GA. 31791. Please sign our online guest registry at www.banksfh.com. Banks Funeral Home in Sylvester is in charge of arrangements.

Mr. Joe Kemp Shiver, 94 of Sylvester, died on Saturday, February 1, 2020, at Pine Shadows Retirement Manor. The funeral service will be held at 11:00 AM on Tuesday, February 4, 2020 at the First Baptist Church of Sylvester, interment will... View Obituary & Service Information

The family of Mr. Joe Kemp Shiver created this Life Tributes page to make it easy to share your memories.