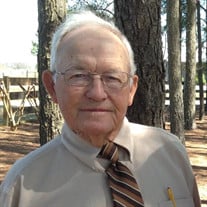 Mr. James "David" Bryan, 92, of Sumner, died March 31, 2022, at his home, outside of Sumner, on the farm where he had started crops for 54 years. His death was due to congestive heart failure, after a brief and rapid decline in health. The funeral service will be held at 3:00 PM on Sunday, April 3, 2022 at Pinson Memorial United Methodist Church in Sylvester, where he had been a member since 1964. Interment will follow in the Hillcrest Cemetery. The Rev. Janet Sack and Rev. Donnie Duncan will officiate. Mr. Bryan was a retired farmer, who was twice recognized as District Soil Conservationist of the Year, and named Worth County Senior Farmer of the Year twice, in 1993, and again in 2015. He farmed in partnership with his wife, Jeannene, and for several years with two sons, Jimmy and Johnny. He raised peanuts, cotton, tobacco, and cattle. David Bryan was born July 30, 1929, on a farm near Terrell Church in Turner County, but raised primarily on the farm in Worth County where he worked and lived out the rest of his life. He attended graduated from Sumner High School in 1946. He attended Abraham Baldwin Agricultural College in Tifton, before attending UGA. He taught Agriculture to military veterans in the mid-1950's, through the VA Institutional On-Farm Training Program, before turning solely to farming. He and Alice "Jeannene" Gay married on December 29, 1957. In a marriage lasting 64 years, they raised four children: James David Bryan, Jr. (Jimmy), Elizabeth Ann Bryan (Beth), John Timothy Bryan (Johnny), and Emory Gene Bryan. His parents were James Edward and Janie (Young) Bryan. He has one older sister, Anna Rachel Ross, of Tifton, now 94 years old. Half-siblings include Gula and Wheeler Bryan; Otis and Joe Wright; and Verna, Nuny and Mary Julia Bryan, all deceased. He is survived by his wife Jeannene, daughter Beth (children Bryan, Julie); Sons Jimmy (James, Drew); Johnny (wife Debbie; children Jason, Timothy, Annie); and Emory (wife Melissa; children Rebecca, Kelly, Laura, Emily); and seven great-grandchildren. He was predeceased by two grandchildren, Laura Beth and John David Bridges, daughter and son of Beth Bryan. The family will receive friends on Sunday from 1:00 PM until 2:30 PM at Pinson Memorial United Methodist Church. In lieu of flowers, the family suggests donations to Pinson Memorial United Methodist, Nursery Fund.

Mr. James "David" Bryan, 92, of Sumner, died March 31, 2022, at his home, outside of Sumner, on the farm where he had started crops for 54 years. His death was due to congestive heart failure, after a brief and rapid decline in health. The... View Obituary & Service Information

The family of Mr. James David Bryan created this Life Tributes page to make it easy to share your memories.