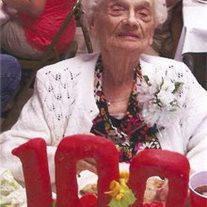 Mrs. Fannie Aultman Lawson Smith, 100, of Tifton died April 2, 2011 at her daughter’s residence. The funeral service will be held at 11:00 AM Tuesday April 5, 2011 at Banks Funeral Home Chapel with interment to follow in the Hillcrest Cemetery with Rev. Jerry Cooper and Pastor Ed W. Waller officiating. Mrs. Smith was born on April 19, 1910 in Worth County to the late William Henry and Mary Trawick Aultman. She lived in Worth County most of her life and was the oldest of fourteen children. Mrs. Smith was formally employed with Coat’s & Clark of Albany and had also worked at Clary’s Five & Dime store. She had worked on the farm with her first husband for many years and later in life managed the Empire Annex and worked at the Dollar Store. She was a member of New Bethel Freewill Baptist Church. Survivors include a daughter Latrelle L. Barksdale (Rev. Bill) of Tifton, sisters; Lorene A. Fambro, Ilone A. Hufstetler, Maurice A. Shearer of Atlanta, brother Linwood Aultman of Hillsdale, IL.; daughter-in-law Carolyn Lawson of Sylvester, step-daughter-in-law Vernita W. Smith of Shingler 7 grandchildren, 11 great-grandchildren, 10 great- great grandchildren and many nieces and nephews. In addition to her parents Mrs. Smith was preceded in death by her husband’s, James E. Lawson Sr., Cecil Almer Smith, Sr., her son James E. “Ed” Lawson, Jr., nine siblings, a grandson, a great grandson, a step son, and a step daughter. The family will receive friends from 6:00 PM-8:00 PM on Monday April 4, 2011 at Banks Funeral Home. Sign our online guest registry at www.banksfh.com Banks Funeral Home in Sylvester is in charge of the arrangements. 229-776-2055

Mrs. Fannie Aultman Lawson Smith, 100, of Tifton died April 2, 2011 at her daughter&#8217;s residence. The funeral service will be held at 11:00 AM Tuesday April 5, 2011 at Banks Funeral Home Chapel with interment to follow in the Hillcrest... View Obituary & Service Information

The family of Mrs. Fannie Aultman Lawson Smith created this Life Tributes page to make it easy to share your memories.