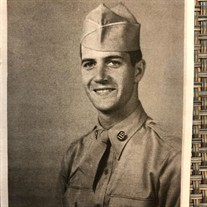 Mr. Eugene “Gene” Hudson of Fairhope, Ala., a native of Sylvester, Ga., and former resident of Brewton, Ala., died on Tuesday, October 8, 2019 at his residence. Mr. Hudson was born on January 29, 1930 In Sylvester, Ga., to the Sheriff Davis Stewart Hudson and Ruby Sumner Hudson. He was a veteran of the Korean War having severed with the Army Security Agency, attached to the 82nd Airborne Division. He graduated from Marion Military Institute in 1949, and from Alabama Polytechnic institute “now Auburn University” in 1956 with a degree in Animal Husbandry. In 1958, he was employed by T.R. Miller Mill Company In Brewton, Ala., as a personnel Director and remained with that company until his retirement in 1991. In Brewton, Mr. Hudson was active in many civic capacities, serving three terms on the Brewton City Council and two terms on the Board of Directors of the Chamber of Commerce. He was very active with the Boy Scouts of America and Little League Baseball programs, was a charter member and past President of the Brewton Kiwanis club, and a member of the First United Methodist Church. Upon retirement from T. R. Miller Mill Company, he returned to Sylvester, Georgia, and in 1993 became a long term Care Ombudsman with the Council on aging in Albany, Georgia. He was an active member of Pinson Memorial United Methodist Church in Sylvester and served on the Board of Directors for the Sylvester Housing Authority. A resident of Baldwin County, Alabama since 1999,. Mr. Hudson was a charter member of Celebration United Methodist Church in Daphne and upon moving to Fairhope in 2006, Became an active member of Jubilee Shores United Methodist Church. He is preceded in death by his son’s, Joseph Sumner Hudson of Daphne, Alabama and Wilson Stewart Hudson of Youngstown Florida; his daughter in law, Kathy Conti Hudson; his brother, LT.General John Bell Hudson; and his parents. He is survived by his wife of sixty-seven years, Kathryn (Booda) Hudson, and two children, Suzanne Hudson (Joe Formichella) of Fairhope, and John Chandler Hudson (Frances) of Fairhope; daughter-in-law, Susan Rush Hudson; nine grandchildren, Hudson Lewis (Jennifer), Brooke Gaudry (Adam), Melody Griffin (Lance), Jason Hudson (Heather), Trinity Micheal Hudson, Jessica Wofford (Bill), Ted Daniels (Amanda), Ryan Pickett (Jillian White), Schuyler Pickett (Carla Thurman), William Paul Lewis, Joseph Eliot Formichella (Lauren), and Samuel James Formichella; and many great grandchildren. On Saturday, October 12, a visitation will be held from 9:30-11:00 AM., followed by a celebration of life at 11:00 AM at Jubilee Shores Methodist Church, 17261 State Highway 181, Fairhope. In lieu of flowers, memorial gifts can be made to Jubilee Shores United Methodist Church, P.O. Box 1046, Fairhope, AL, 36533 or to a favorite charity.

The family of Mr. Eugene “Gene” Hudson created this Life Tributes page to make it easy to share your memories.

Mr. Eugene “Gene” Hudson of Fairhope, Ala., a native of Sylvester,...