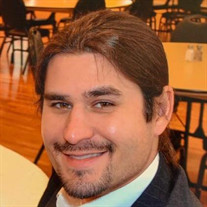 Benjamin Ray Senkbeil, 32, passed away January 11, 2020, surrounded by his family. Visitation will be at Banks Funeral Home in Sylvester, GA on January 14, 2020 from 5:00-7:00pm. Funeral services will be at First Baptist Church of Sylvester on January 15, at 11:00am with interment to follow in the Hillcrest Cemetery. Pastor Donnie Duncan will officiate. Ben was born September 8, 1987 to Brad and Jeannine Senkbeil, of Sumner, Ga.Though he weighed over 11 pounds at birth, his personality was even larger. Ben grew up on his family’s farm, developing a passion for the outdoors early in life. He spent much of his youth walking the fields, exploring forests, hunting, fishing and building forts. At an early age, he possessed an uncanny ability to focus. He excelled in all areas of academics, especially math. He knew that 1 Cross + 3 Nails = 4 Given. He was a lifelong member of First Baptist Church in Sylvester. Ben was a natural leader who found purpose in everything he did and enriched the lives of every single person who knew him. He accomplished every single goal he set his mind to. He was in impeccable shape, tall and lean. Ben treated his body as a temple. He didn’t smoke, drink alcohol or even soft drinks. He ran track, cross country, lifted weights and was tremendously strong. Ben was physically prepared and stayed mentally courageous during his 6 month battle against cancer. With his niece and nephews he shared his love of creativity, ingenuity and imagination through the many LEGO sets he gifted them. He had a great booming laugh, a wonderful sense of humor and a smile that lit up any room. Ben was a 2006 graduate of Tiftarea Academy. After graduation he vowed never to accept a paycheck from anyone but himself! From age 19 to the year 2019 he was the owner/operator of The Pawn Shoppe in Sylvester. He began with an empty storefront but a passion to help others in need. For over 12 years, The Pawn Shoppe became a favorite meeting place for gun enthusiasts, deal hunters, and the local community. He ran his store with the same guiding principles he lived his life by; treat others the way you would want to be treated and always smile while doing it. After retiring from the store, Ben began exploring his interest in real estate ventures. Ben loved to travel. He had been around the world, as far as Germany, France and Italy. He rode elephants, swam with dolphins, viewed mountains from a hot air balloon, hiked parts of the Appalachian Trail, parasailed over oceans and para-glided over lands, yet Ben loved walking the family farm more than anything. He was a gifted gardener. The rooms at home were filled with glass vases containing his bountiful blooms. He is survived by his parents Brad and Jeannine Senkbeil of Sumner, Ga, his 3 siblings Matt (Holly) Senkbeil of Sylvester, Seth (Amy) Senkbeil of Tifton, Kelly (Justin) Cooper of Sumner and his fiancée Stephanie Whiddon (children, Austin & Kalvin Johnson) of Baconton, GA; and his 5 nephews Colby and Castin Cooper, Bryton Puckett, Bradford and Stratton Senkbeil and 1 niece Addison Senkbeil, all of whom adored their “Uncle Ben”.

Benjamin Ray Senkbeil, 32, passed away January 11, 2020, surrounded by his family. Visitation will be at Banks Funeral Home in Sylvester, GA on January 14, 2020 from 5:00-7:00pm. Funeral services will be at First Baptist... View Obituary & Service Information

The family of Mr. Benjamin Ray Senkbeil created this Life Tributes page to make it easy to share your memories.