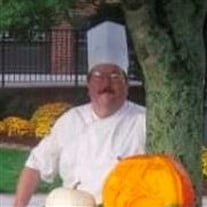 Andrew Bryant “Drew” Miller, III, age 58, peacefully passed away on December 30, 2018, at Kennesaw Hospital after a year of declining health because of Diabetes. He was surrounded by his loving family, sister Andrea Miller, his Aunt Carol Wilkes, and several close friends. He will be remembered by many as a top caliber chef who inspired the next generation of culinary artists. Funeral services will be Saturday, January 5, at 2 PM at Banks Funeral Home Chapel. Reverend Ronnie Howell will officiate with Eulogies given by his sister Andrea, and friends Dave Paul and David Nguyen. Pallbearers are Ronnie Gilbert, Barry Brewton, David Davidson, Tom Jensen, Randy Schoen, David Nguyen and Dave Paul. Drew was born October 13, 1960, in Macon, Georgia, to the late A. B. Miller, Jr. and Nellie Graham Miller, who survives. He lived his early education years in Macon and then the family of four, who had added Andrea to their midst, moved to Marietta where he finished his high school education. During his childhood, many weekend and weeklong visits were made to his father’s parents family farm in Worth County, GA ( Ty Ty, GA, in the postal service!) He was greatly influenced by his grandparents, the late Bill and Pauline Wilkes. Grandpa Bill was a legendary hunter of all forms of wildlife which provided meat for many families. Drew learned to dress and cook deer, rabbits, birds, possum and more not mentioned here. He got a lot of his adventurous spirit from Grandpa Bill. But, perhaps his greatest influence was watching and helping Grandma Pauline prepare meals. She was the best cook he ever knew (please excuse him all you wonderful chefs!) She cooked with love for her family. Her deer roasts were so tender. Her peach and apple turnovers were perfection. Her fried chicken so crispy. Everything out of her small kitchen was YUM! The family also spent a lot of time with Nellie’s family, traveling once a month to Grandma Graham and Grandpa Grahams country home and farm in Brewton/East Dublin. There they met with Nellie’s brothers and sisters and their more than 35 first cousins. When Drew was a teenager, Bryant bought a cabin Lake Sinclair where they met for years. The cousins still meet for holiday celebrations and family reunions. They always love, laugh and have fun. As a young man, Andrew took over. He was a graduate of Georgia College in Milledgeville, earning a Bachelor of Science in computer science and education. Then he followed his love of cooking and started his career as Chef Andrew. He was an apprentice chef at the Capital City Club in Atlanta and studied at American Culinary Federation. He then became a garde-manger chef at the Hyatt Regency. He later moved on as a specialty chef for the acclaimed Nicolai’s Roof where he became an accomplished ice carver and culinary artist. He was former Sous Chef at The Omni Homestead Resort in Hot Springs, VA. Chef Andrew eventually shared his love of cooking with others by becoming an instructor at the Le Cordon Bleu Culinary Institute. He later moved to the program at Gwinnett Tech where he guided and inspired his students to many award-winning culinary presentations. During his career, Chef Andrew won several awards and medals, including Apprentice of the Year and later, Chef of the Year. Many of his students also won high honors and went on to lead very successful careers in the food business. He served on the board of the Atlanta Culinary Federation. A memorial service will be held at the Gwinnett Technical College in the Culinary Arts Department on Monday, January 14 for those who would like to attend. Drew had a wide, beloved circle of friends, many lifelong, that he socialized with. He was already ready for adventure, a night on the town, a party or a trip out of town. He was a confidant and listener to anyone who approached him with whatever problem or the need for advice, whether it was career or personal. He was beloved and highly respected by many including his immediate family, extensive, extended family, and many, many colleagues and life-long, close friends. The many testimonies from former students, fellow Chefs, and close friends has touched the hearts of his extended family. Thank you for loving Drew. He is survived by his mother Nellie Miller of Marietta, sister Andrea Miller of Terra Ceia, FL, niece Leah Sosnik of Greensboro, NC, Aunt Carol Wilkes of Byron, numerous cousins, and those whose lives he touched. Drew was preceded in death by his aunts and uncles from his mother’s family, excluding Aunt Vergie Graham, who survives. The family wishes a special thanks to Billy and Vickie Young for their Hospitality.

Andrew Bryant &#8220;Drew&#8221; Miller, III, age 58, peacefully passed away on December 30, 2018, at Kennesaw Hospital after a year of declining health because of Diabetes. He was surrounded by his loving family, sister Andrea Miller, his Aunt... View Obituary & Service Information

The family of Mr. Andrew Bryant Miller III created this Life Tributes page to make it easy to share your memories.