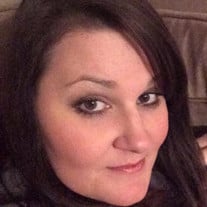 Mrs. Alicia Jennings Rogers, 42, of Putney, formerly of Worth County, died on Wednesday, February 9, 2022. The funeral service will be held at 3:00 PM on Sunday, February 13, 2022 at the First Baptist Church of Sylvester, interment will follow in the Poulan Cemetery. The Rev. Trey Brown and Rev. Donnie Duncan will officiate. Alicia was born on August 20, 1979 in Albany, GA. She had lived in Worth County most of her life. Alicia was a graduate of the Worth County High School Class of 1997. She was formerly employed with Phoebe Putney Memorial Hospital and at the Albany Gastroenterology in Albany, where she worked as a registered nurse until she became a stay-at-home mom. Alicia enjoyed being a mama to her son, an EE to her nephews and nieces, and spending time with her friends and family. She was Luke’s biggest fan in all his sports and daily life. She loved helping others and had the biggest heart for everyone. She was truly beautiful on the inside and out. She was a member of the First Baptist Church of Sylvester. Survivors include her son, Luke Rogers of Sylvester and step-son, Ronnie Rogers of Lee County; husband, Ron Rogers of Putney; father, Jim Jennings of Sylvester; siblings, Melissa Kelly, Claudia Jennings, and Jamie Jennings (Nicole) all of Sylvester; nephews, Blayne Kelly, Garrett Kelly (Kinsey), Tucker Johnson and Trent Johnson (Mattie); Wyatt Jennings, niece, Emery Jennings; grandmother, Dean Sheffield; and a host of extended family members. Alicia was preceded in death by her mother, Brenda Henderson Jennings, on October 14, 2020. Also, her grandparents, James T Jennings, Sr., Gladys Jennings, Hubert Henderson, and Preston Sheffield. The family will receive friends on Sunday from 1:00 PM until the service hour at First Baptist Church of Sylvester. Please sign our online guest registry at www.banksfh.com. Banks Funeral Home in Sylvester is in charge of arrangements.

Mrs. Alicia Jennings Rogers, 42, of Putney, formerly of Worth County, died on Wednesday, February 9, 2022. The funeral service will be held at 3:00 PM on Sunday, February 13, 2022 at the First Baptist Church of... View Obituary & Service Information

The family of Mrs. Alicia Jennings Rogers created this Life Tributes page to make it easy to share your memories.

Mrs. Alicia Jennings Rogers, 42, of Putney, formerly of Worth...