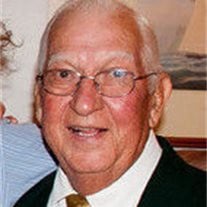 Mr. A.C. (George, Bubba) Popham, 84, of Sylvester, GA, died Thursday May 31, 2012 at his residence, after a battle with cancer. A memorial service will be held at the Pinson Memorial United Methodist Church in Sylvester on Saturday, June 9th at 11:00 a.m. He requested that his body be donated to the Medical College of Georgia in Augusta for medical research. George was born on April 10, 1928 to the late Lester Clarence and Lovie Cleo Higginbotham Popham in Waycross. He was a graduate of Wacona High School in Waycross, Morton Electrical College, Bliss Electrical School in 1948, Carnegie University in 1952 and the Johns Hopkins McCoy College in 1958. George had lived in Sylvester, GA for the past 10 years after spending 12 years of his retirement life in Tampa. He and his wife Nancy had raised their family for 34 years in Severna Park, MD., where George was employed as an electrical engineer and program manager at Westinghouse Electric Corp. His 42 year career in air, sea, and undersea defense programs including stints working in Iran, Morocco, and NATO in Germany. He was also a U.S. Army Veteran of WWII. George was a great friend whose wit, generosity, and thoughtfulness was appreciated by many. He had a passion for his family and community service, and he was an avid follower of government, politics, sports, and current events. He was articulate, humorous, and known to tell it like it is. He was an accomplished gardener and grillmaster. He was a member of the Pinson Memorial United Methodist Church, United Methodist Men's Club, the Sunshine Club, and the Worth Lodge # 194 F. & A. M., the Temple Terrace Presbyterian Church and Meals on Wheels in Tampa. He was a member of the Woods Memorial Presbyterian Church in Severna Park, MD., a charter member and President of the Severna Park Kiwanis Club. He was a baseball coach in the GSPLL. He was a big fan of the Baltimore Ravens/Colts and the Baltimore Orioles. Survivors include his loving wife of 57 years, Nancy Johnston Popham of Sylvester, children, Jeffrey J. Popham (Mary) of Bristol, RI., Melinda A. Popham of Annapolis, MD. and Andrew J. Popham (Melissa) of N. Little Rock, AR., grandchildren, Jay, Michael, Grace, Sarah, Audra, Mallory, Kara & Harrison Popham, sisters, Shirley Arline Roberts of Inverness, FL, Rose Westberry of Tampa, FL., brother, Dale Popham of Clermont, GA, and numerous cousins, nephews, and nieces. In addition to his parents, George was preceded in death by his daughter Jill, in 2000, and by his brother Maitland, in 2002. Pinson Methodist Church will have a reception following the memorial service for the family and friends in the Fellowship Hall. In lieu of flowers, donations can be made to the Pinson Memorial U.M. Church (www.pinsonmethodist.org), P.O.B. 118 Sylvester, GA., 31791, Worth Lodge (www.worthlodge194.org), P.O.B. 1 Sylvester, GA., 31791, or Southern Care Hospice (www.southerncareinc.com), 412 1st. Street SE, Moultrie, GA. 31768 For guestbook and condolences, visit www.banksfh.com Banks Funeral Home in Sylvester is in charge of the arrangements. 229-776-2055

Mr. A.C. (George, Bubba) Popham, 84, of Sylvester, GA, died Thursday May 31, 2012 at his residence, after a battle with cancer. A memorial service will be held at the Pinson Memorial United Methodist Church in Sylvester on Saturday, June 9th... View Obituary & Service Information

The family of Mr. A. C. George Popham created this Life Tributes page to make it easy to share your memories.